Single level slab on grade homes are becoming more common in my area.  Being in a very cold climate, choosing a heating system for this type of structure requires some thought.  A common choice is radiant in-floor heat.  This type of heat works by heating the floor, which in turn heats anything in contact with the floor.  The air is heated by the heat radiating off these warmed surfaces.  A very comfortable heating system when installed correctly.  One problem, a second, faster reacting system will be needed for heating during the shoulder months when just a little heat is needed. And then there’s cooling.  Most homes in my area are installing air conditioning. which will require another system.

A great choice for a slab on grade home is a cold weather air source heat pump.  Most of these systems are called “mini-splits” meaning they have an outdoor condensing unit and a wall hung indoor air handler.  Both heating and cooling are satisfied with one single unit.  Super-efficient, affordable to install and low operating costs are the benefits.  The problem is they won’t quite produce enough heat during the coldest periods of the year to maintain comfort, at least not in my very cold climate.  A second source of heat will be required.

How about forced air heating.  There are all sorts of forced air systems to choose from.  The problem becomes the ductwork, no basement or crawl space where the ductwork would traditionally be installed.  This could leave the ductwork to be installed in unconditioned spaces, not a great idea.  I’ve lost track with how many homes I’ve been in over the last year where ductwork is placed in the unconditioned attic space.  Whether it’s the main heating system or a second source to provide a back-up heat or air conditioning, I’m seeing lots of ductwork in the attic.

So, what’s wrong with ductwork in the attic?  There are many reasons this creates issues.  First, there are the penetrations through the ceiling air control layer.  The ceiling is the most common place for air leakage to the outside to occur during the heating season.  All that ductwork from the furnace will need to both exit and enter through the ceiling at some point.  All these holes must be sealed, and often times they aren’t sealed well enough.

Second, any ductwork that leaves the conditioned space must be insulated.  In my very cold climate, this insulation is required to be minimum of R-8.  (In my opinion, this isn’t enough insulation.)  Most of the insulated ducts being installed in unconditioned spaces are insulated flexible duct.  A better system is solid metal ducting, but costs and difficulty installing and insulating often prevent this type of ducting choice.

Third, all the ductwork that leaves the conditioned space will need to be meticulously sealed.   Air leaking into the attic from the supply side of furnace ductwork can create a negative pressure within the conditioned space of a home.  Ducts that leak on the return side when placed in an attic will create a positive pressure within the home.  All these ducts need to be sealed to limit air leakage.  As a matter of fact, the building codes have addressed this issue by requiring ductwork that leaves the conditioned space of a building be tested.  This test, called a duct blaster test, uses a fan to create a pressure inside the ductwork.  Pressures are then measured and a leakage rate is calculated.  No testing is required if ductwork stays within the building envelope.

Other issues with ducts placed in unconditioned spaces is the possibility of the ductwork condensating.  Temperature differences between ducts and the space around them can cause moisture to form either inside or outside the duct.  Water dripping onto building materials can cause issues.  Ducts placed in attics also displace insulation resulting in hot or cold areas that I can often see with my thermal imaging camera.  I have also seen building components such as manufactured trusses cut to allow the placement of ductwork.  This can create a structural issue with the home.

What options do we have to keep ductwork within the conditioned space?  One option is to install the ductwork inside the home and build chases and soffits to hide them.  Chases and soffits can look good if properly planned, they can also look out of place if not well thought out.

Another option is to use a plenum truss.  I used this option on a recent project I worked on.  A plenum truss is simply a notch made in the truss to allow ductwork and other mechanical systems to remain inside the building envelope.  The truss is then filled in with framing to provide a flat ceiling.  One limitation is the notch size will be limited to the truss design and there will be some design limitations for the mechanical systems based on the location and size of the notch. 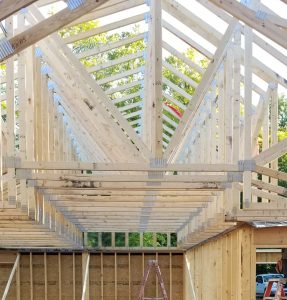 Next option is to frame the entire ceiling down to allow for mechanical systems.  I have read several articles where this design was implemented. Basically your building a ceiling cavity under the main roof framing.  This may require additional engineering and coordination with the mechanical contractors but will allow the entire ceiling to act as a service cavity.

Last option is to create a conditioned attic.  These are popular in southern states, but rare in my northern climate.  A conditioned attic is a space where the roof is insulated and air sealed leaving the entire attic space open for mechanical systems and storage.  Codes in my climate require ceiling insulation levels to be R-49.  This means there will be al least 7 inches of closed cell spray foam or more than 12 inches of the fluffy insulation.  Or…a combination of rigid exterior insulation on the top side of the roof and fluffy cavity insulation below.  I nice option, but like I said, rare in my climate.

There you go, several options for heating and cooling systems and keeping ductwork inside the conditioned space of a slab on grade, single level home.  Please leave me comments and questions.  I’d like to hear any suggestions I can make to improve this blog.

Welcome to Northern Built, where we discuss building science, construction techniques, and energy for homes built in a cold climate.